Not only is it likely to be the most-watched television series ever, but the South Korean series Squid Game is already having a global commercial and cultural impact.

Fans have sent sales of the show’s signature green tracksuits and white Vans slip-ons soaring – up 7,800%, according to data provided by Sole Supplier – and South Korean dalgona biscuits are fast becoming a youth craze.

An Yong-hui, a Seoul street vendor who made the dalgonas – a honeycomb biscuit featured in the drama, told Reuters that fans start queueing outside his street kitchen at 11am, and he now sells 500 a day, compared with his pre-Squid Game sale of 200.

The ultra-violent survival drama has also made a new star of Ho Yeon Jung, who plays lead character Sae-byeok, number 067. Last week, the 27-year-old model turned actress was made a global ambassador for Louis Vuitton after seeing her Instagram following jump from 400,000 to 17 million, and she also stars in Adidas’s latest campaign.

With Halloween approaching, the show – which revolves around a group of 456 people who compete for a lifetime supply of money by playing life-or-death bouts of grandmother’s footsteps, among other games – has also spawned an onslaught of lookalike costumes.

Amazon lists over 2,000 results for the term “Squid Game costume”; on Google Trends, the search engine’s in-house platform that tracks user interest, it is ranked a “breakout” search term.

The show is set to become Netflix’s biggest ever, beating current record holders Bridgerton and Lupin, and is at No 1 across 90 countries after its release three weeks ago. According to the South China Morning Post, the show is also popular in China, but in pirate form because Netflix is unavailable and the programme is unlikely to get past state censors if it were available. Piracy of the series is so prevalent that Jang Ha-sung, South Korea’s ambassador to China, lamented during a congressional meeting in Seoul on Wednesday that it was being streamed on more than 60 illegal Chinese websites. Jang said he had asked Chinese authorities to take action.

The show is a test for the platform’s latest venture – an online store – selling T-shirts and hoodies inspired by the series. The company hopes merchandising will boost flagging subscriber growth.

Girls buying dalgonas in Seoul – Squid Game has boosted business for the street vendors who sell them. 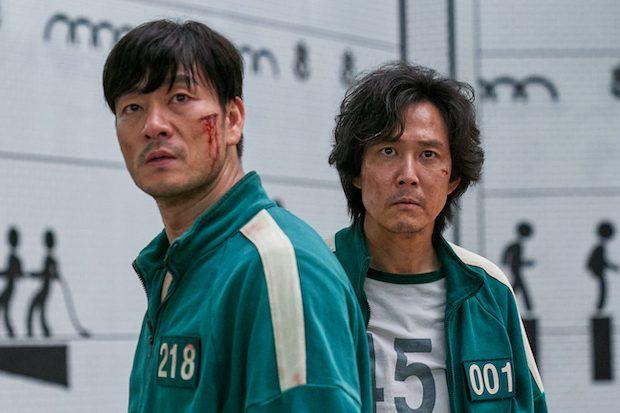 And it represents a substantial payoff for Netflix’s investment in South Korea. The streaming giant invested around $700m for Korean films and television shows from 2015 to 2020. Since 2016, Netflix has introduced about 80 Korean films and series, and US viewing of K-dramas has doubled in the past two years.

Building on the success of movie Parasite and the K-pop bands BTS and Blackpink, Netflix vice-president of content for Korea Minyoung Kim said “audiences around the world are falling in love with Korean stories, artists and culture”. This year, the platform plans to spend $500m on Korean content.

Hwang Dong-hyuk, the creator of Squid Game, said he came up with the idea while broke and living with his mother and grandmother. At one point, he was forced to sell his laptop for cash.

After 10 years of delays, with investors and actors shying away from a story that involves competing to the death for money, the intensity of finally filming the series caused him to lose six teeth to stress.

“On my left side, I still don’t have two molars,” he said in an interview with CNN Film School this week. “I need to get implants but haven’t had the time.”

Chef and My Fridge: the South Korean cooking show that will get you to clean out your fridge

The popularity has also inspired British police to warn teenagers not to emulate the game. Invitations to participate in Squid Game simulations are reportedly circulating online, with the warning that losers will be stampeded and shot with a BB gun.

“We are aware of a post on social media and are working to find out further details in order to ensure a policing plan is in place,” the Metropolitan police said in a statement.

But the show has also inspired some intellectual moralising.

“To be clear, there is an obvious difference between spectatorship of real-world and fictional violence,” wrote a columnist with Variety, wondering how to reconcile staged violence and inhumanity with entertainment – an enduring dilemma for Hollywood.